As Few Footprints as Possible
an exhibition of Dominika Kulczyńska 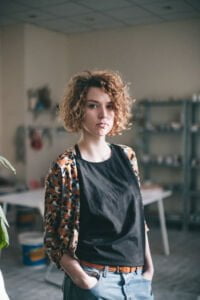 What kind of traces are we leaving behind? What consequences of human ambition and egotism will our descendants suffer? We invite you to visit the SIC! BWA Wrocław gallery and see Dominika Kulczyńska’s […]

What kind of traces are we leaving behind? What consequences of human ambition and egotism will our descendants suffer? We invite you to visit the SIC! BWA Wrocław gallery and see Dominika Kulczyńska’s exhibition As Few Footprints as Possible.

We invite you to visit the SIC! BWA Wrocław gallery and see Dominika Kulczyńska’s exhibition As Few Footprints as Possible. It is the artist’s protest against the cultural and social practice of measuring the value of our lives by means of the number of traces we leave behind on our planet after we die. It is also an exceptional project aiming to expose the carbon footprint left in the process of production and organization of a contemporary art exhibition.

In 2020, the Kingdom exhibition was displayed in the SIC! gallery windows. It was a vision of the world after the Age of Man, a metaphor of downfall and end, but also of rebirth. The concept was an expression of artists reacting to the experience of the initial months of the global pandemic. It was also a reflection on the rapidly transforming planet, resulting from climate change. One of the windows featured a new life sprouting in weirdly-shaped pieces of porcelain, at first glance resembling plant roots or mycelium seeds. Some were stark white, others smudged with plastic left on the ground. The new organisms growing from the soil bore signs of the past, like mineral records – trace fossils remaining after the kingdom of man.

A year later, in his very important book Footprints: In Search of Future Fossils, David Farrier asked the uncomfortable question of the legacy of the Anthropocene. What kind of traces are we leaving behind? What consequences of human ambition and egotism will our descendants suffer? How are we going to be presented in the myths and tales of the future generations, still breathing the carbon dioxide we produced?*

Dominika Kulczyńska, an artist working in ceramics, has been reflecting on those issues for years in her creative strategy. In her latest exhibition As Few Traces as Possible, she opposes the culturally and socially accepted narration in which life is only significant if any kinds of traces are left behind us after we die. In times of climate change and the global crisis resulting from it, the only rescue for the planet is a considerable reduction in human activity.

What else do David Farrier’s book and Dominika Kulczyńska’s project have in common? An in-depth reflection on how our current decisions shape the future. And also a conviction of the symbiotic character of our relationship with the environment, in which the driving force of man can be constructive, and our current attitudes may change enough to offer a more positive future perspective. In this way, As Few Footprints as Possible complements the exhibition from two years ago – the element adversely influencing the environment (i.e. man) is eliminated, but life goes on.

In her project, the artist ensures the mutual presence, memory and visibility of diversity, a multitude of narrations and approaches. Kulczyńska’s latest works become heroes in a reflective, enveloping space and atmosphere rooted in sacral architecture. We enter a shrine of earth and nature, where ecology becomes our cult, reigned by the pagan deity of popular culture.

Lynn Margulis, who explained the origin of photosynthesizing organisms, published a book in 1998, in which she called the Earth-Gaia a “symbiotic planet”. We will be able to experience it on a small scale at the SIC! gallery.

In its organizational strategy, the exhibition assumes the calculation of the carbon footprint at any of its stages.

*David Archer, a geophysicist at the University of Chicago, published data on fossil fuels indicating that a third of the Anthropocene’s carbon will remain in the atmosphere for thousands of years to come. In time, its amount will be diminishing, but it will keep influencing climate change for the next half a million years.