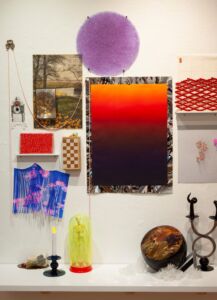 Autonomous Zones is the biggest exhibition at BWA Wrocław in 2022, celebrating the 50th anniversary of the international centre for glass art education – Pilchuck Glass School in the United States. Artists from […]

Autonomous Zones is the biggest exhibition at BWA Wrocław in 2022, celebrating the 50th anniversary of the international centre for glass art education – Pilchuck Glass School in the United States. Artists from nine countries present glass as a medium tackling contemporary issues and break stereotypical thinking about the material in gallery space, demonstrating what the title autonomous zones are.

Out of the 181 artists who over the last thirty years have participated in one of the most prestigious residency programmes in the world – Emerging Artists in Residence at Pilchuck Glass School – curators Mika Drozdowska (BWA Wrocław), Sarah Traver (Traver Gallery) and Benjamin Wright (Pilchuck Glass School) shortlisted 25 participants in the Autonomous Zones exhibition at BWA Wrocław Główny Gallery.

The exhibition shows how space, time and community – fundamental elements of the EAiR programme – influence creative and conceptual processes. The audience will have an opportunity to see an innovative approach to glass presented by artists from the USA, Poland, Japan, Norway, Denmark, Sweden, South Korea, England and Scotland. We will invite viewers to learn about the history of Pilchuck Glass School, the American centre for glass education, in the context of such issues as autonomous zones, countercultural reactions, guerrilla movements and grassroots organizations. The BWA Wrocław Główny exhibition will be divided into parts presenting e.g. new formalism, process orientation, issues relating to the environmental crisis and sexuality.

“Autonomous Zones” are communities and territories whose functioning is based on alternative social and political reality. They are independent and self-governing. Their power comes from the self-actualisation of communities and individuals. They are independent of external, global mechanisms and systemic processes, says curator Mika Drozdowska. In our turbulent and polarised time, autonomous zones are mainly associated with a form of struggle and rebellion. Struggle for freedom, self-determination and respect for every human or non-human being. They are often observed as particular infrastructure, self-made tent cities, but also as mobility itself. They express resistance and persistence.

Pilchuck Glass School is a good example, with its history of an autonomous space in both the literal and metaphorical sense. A zone isolated from the outside world. A settlement built by its founders in the foothills of the bucolic, wild Cascade Mountains. This is where an alternative community of artists has been formed for years, artists who have not only developed their power and creative potential, but also shared the same values. Pilchuck Glass School is therefore an autonomous zone, additionally offering a sense of belonging to the environment and connection with others.

Within the scope of Autonomous Zones, we will also focus on the word “autonomy” itself – after all, if we follow the reflections of the exhibition’s creators, it may well be something that will save us. Perhaps the necessity to define oneself precisely in the context of such notions as freedom and safety will allow us to understand the superior value of what we call an autonomous zone, wonders Mika Drozdowska.

The exhibition is held under the Honorary Patronage of the President of Wrocław and it is a part of the International Year of Glass 2022 programme.