exhibition opening: March 4, 2022, Friday at 5 p.m.–9 p.m.
On the same evening, we also invite you to the opening of the exhibition Lewandowska / Marcjasz / Tofan. Intimate Rituals at OP ENHEIM (Solny Sq. 4). 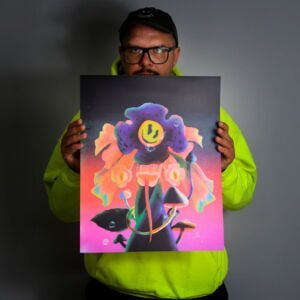 We invite you to the Studio gallery to see an anniversary exhibition of the Graphics Flower Shop. The exhibition presents works created over the decade of the Warsaw screen printing studio. Ten years […]

We invite you to the Studio gallery to see an anniversary exhibition of the Graphics Flower Shop. The exhibition presents works created over the decade of the Warsaw screen printing studio.

Ten years in the world is a period deserving attention. For us, a culture-making entity, it has been a turbulent, eventful epoch. When setting up the Graphics Flower Shop, we knew we wanted to create a place which would be open to interaction with the surroundings, resulting not only in subsequent run-of-the-mill commissions, but also in cultivating culture, the studio’s founders Marta and Kwiatek describe the project. First, at the studio’s birth, a small screen-printing table appeared, turning the everyday workplace into something more than just a money-making venue. The screen soon began to bear fruit – not just in the form of their own artworks, but above all as a good reason for collaboration. Thanks to the little table, acquaintances with artists have been made, often lasting to this day. The next, bigger table resulted in the studio accepting orders from new clients. Exhibitions have been held thanks to this space. Ten years ago we had no idea the rectangular screen with a mesh would influence our lives so much. We decided to use the 10th anniversary as a good opportunity for a series of exhibitions, the owners add. We are now leaving our culture-making entity to share the effects of our screen print efflorescence.

They both arrived at screen printing differently. Marta – the usual way, during her studies in Zielona Góra. Kwiatek – through the street, which led him to Obin in Tricity and then Berlin’s screen printing studios. Right from the start, they felt the freedom and self-agency of screen printing. They appreciate the performative character of the technique, which creates opportunities for collective printing. They see it as very uplifting in times of ever-increasing distance. However, the most important element of their activities is the culture-forming function, understood as the possibility of meeting the author and subsequently creating a work within a particular edition. What appeals to them is the original concept of screen printing as a technique increasing the accessibility of an artwork. At some point, long ago in Japan, they replaced hand-painting with silkscreen printing, which made their kimonos easier to get. Our approach to serigraphy is similar, the founders of the Graphics Flower Shop say. Just like Eduardo Paolozzi or Andy Warhol, we want our art to reach a wide range of audiences, not just museums or private collections. Perhaps naively, but we do believe that art has therapeutic effects and makes the world a better place.

The exhibition confronts screen printing with serigraphy. Not every screen print is a serigraph, but every serigraph is a screen print. The exhibited works form a full spectrum of the Graphic Flower Shop’s decade of screen efflorescences – authorial prints, posters, zines, fairy tales, textiles, but also unsuccessful copies, proving that there is a human being behind every screen print.

The Graphics Flower Shop (Kwiaciarnia Grafiki) – a studio in Warsaw, for the last decade cultivating the culture of screen printing with a view to democratizing access to art. They use this manual technique to carry out orders as well as their own projects, but first and foremost they invite artists to work with them. They distribute effects of their work via the online shop. Their graphic art is unique – the manually printed serigraphs allow for short editions, from several to a maximum of dozens of prints. The replicability of the technique influences its price, which is set at a level accessible to an average fan or collector. On the other hand, authenticity is important – each print is signed by the author.
Freedom, equality, serigraphy!