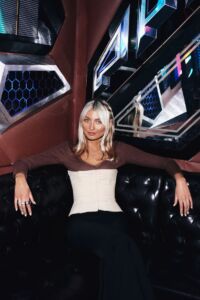 Can a jester set themselves free from the claws of their ruler? For whom and from whom does the wired glass serve as protection? And how the heck do you dance the mazur?! […]

Can a jester set themselves free from the claws of their ruler? For whom and from whom does the wired glass serve as protection? And how the heck do you dance the mazur?! Come to see Karolina Mełnicka’s solo show at the SIC! BWA Gallery Wrocław.

Karolina Mełnicka’s new show They’re Dancing the Mazur again! is a close look at relations of power and submission, in which laughter, dance, fun and play can be tools of rebellion. The artist finds hope in acts of vandalism and delicate, romantic gestures of resistance. She uses parody of known visual codes, buffoonery, shifts and deviations from norms. She blows up cramped cages, creates humorous talismans and tickles until you laugh your head off.

For Mełnicka glass that she used to create the pieces is a carrier for sound and light, thus a material that  can ”perform an event”. The artist sees her works as sculptural documentation of subversive actions; of nocturnal friendships, revolutionary choreographies and dancing protests. For Mełnicka, play is more than just an autotelic experience, it stems from a deep human need.

Objects and ideas in the exhibition They’re Dancing the Mazur Again! lose their primary functions to gain new ones. They tell jokes, mock and dress up as something else or recall child traumas. Chandeliers instead of giving light pretend to be musical instruments. Saliva (or as us-kids would say: hockle) exposed in full light as a kind of trophy, evokes disgust and awe, just as it did when we were kids. Pacified by the artist, wired glass become sketch books in which the wire jokingly repeats the contour of an animated character or simply becomes a doodle (or a coded message perhaps?). Bell is a signal for fun and a warning. The folk dance Mazur (also known as the chasing dance) becomes a metaphor for freedom. Are the footprints on the relief a trace of tired dancing feet?

They’re Dancing the Mazur Again! opens on May 27 with a sound performans Medieval Dreams I-XIII by Lubomir Grzelak (Lutto Lento) and a set by Krzysztof Bagiński from KEM collective Warsaw.

Karolina Mełnicka – born in 1988 in Toruń, Poland. Graduated from cultural studies at the Adam Mickiewicz University in Poznań (2010) and multimedia art at the Art Academy in Szczecin (2016). Her artistic practice can be defined as conceptual critical art examining he mechanisms of realities planned by authorities. She is particularly interested in observing methods of designing spaces and ideas for mass audiences. Karolina works in different mediums. For several years now, she has been organizing events that combine visual arts and music by the name Mazury Club. She lives and works in Warsaw.