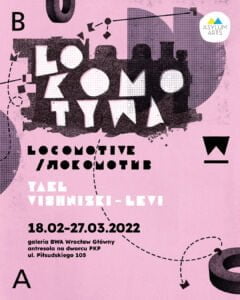 Yael Vishnizki-Levi’s Locomotive is a large-scale, locomotive-shaped installation placed on the premises of a railway station. It concerns migration and mobility, issues which are so relevant nowadays. The exhibition was co-created by members of […]

Yael Vishnizki-Levi’s Locomotive is a large-scale, locomotive-shaped installation placed on the premises of a railway station. It concerns migration and mobility, issues which are so relevant nowadays. The exhibition was co-created by members of the public, who donated their objects and stories connected with relocation.

The multinational-descent artist looks at Julian Tuwim’s well-known poem for children. Educated outside the Polish literary canon, she reads it as an adult, shaped by a different cultural and social paradigm. She uses the locomotive motif, adding historical and contemporary references. Fascinated by the rhythm and metre of the Polish poem, as well as the burst of imagination evoked by Tuwim’s imagery, Yael Vishnizki-Levi aims to reconstruct “Locomotive” in the enfilade-type – connected like railway carriages – rooms of the BWA Wrocław Główny gallery. In her fantasy, she sees it in local and global contexts at the same time, filling up the literary image with contemporary, material content.

Embarking on the project, the artist invited others to co-create it – anyone willing to share with her their objects and stories connected with the experience of relocation. The collected objects were then composed by the artist to constitute a monumental installation. “Locomotive” consists of things described in the poem, like wardrobes and tables, but also objects associated with travel and those bringing to mind more drastic and extreme kinds of migration, including water tanks or emergency tents. The construction harks back to the memories of childhood games, in which imagination turns whatever is close at hand – ordinary, everyday objects – into entirely new, both real and invented things. The fact that the work is located in the building of a railway station is meant to emphasize the issue of migration, a topic which is especially valid in today’s world.

The artist’s welcoming gesture resonates anew in the pandemic context, infected with fear and afflicted by new restrictions, influencing our perception of personal property. What is our attitude to mobility and change when facing the tragedy of people dying on the Polish border, but also the southern boundaries of the European Union? Do we even see people in them, individuals with their personal stories, or only inevitable victims of the political and economic clash of global interests?

Yael Vishnizki-Levi is an artist based in Warsaw, Poland. She holds a BFA (cum laude) from Bezalel Academy in Jerusalem, Israel and is completing her MA at the University of Warsaw, Poland. Yael exhibits her work internationally including at the Wrocław Contemporary Museum, Poland and Arad Contemporary Art Center, Israel. She participated in residency programs including at the POLIN Museum, Poland, the Nida Art Colony, Lithuania and the Arad Art&Architecture, Israel. In her work, Yael deals with ideas of representation and recreation of historical issues. She is interested in concepts of migration throughout the 20th century and in social and artistic movements from Central-Eastern Europe. Yael relates to the creative experience as a means of stimulation. She uses archival images which allow her to channel personal and collective stories through documents and letters among other found objects. By incorporating different materials into her installations, Yael attempts to create an interactive, multidisciplinary art form and build bridges and communication within the society.